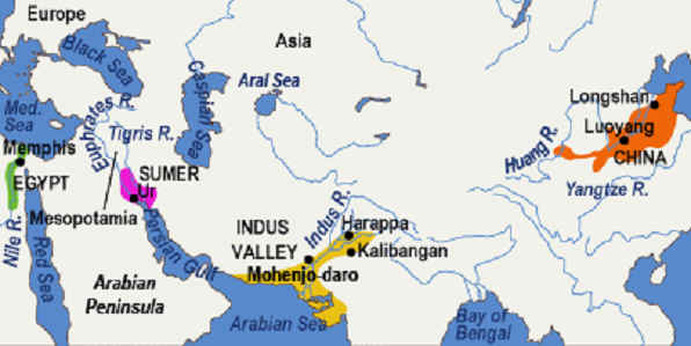 Between about 3500 and 2500 B.C., in the river valleys of the Tigris and Euphrates rivers of Mesopotamia, the Nile River valley in Egypt, the Indus River valley in northern India, and along the Huang He, or Yellow River, in China, different groups of Neolithic farmers went a single, yet infinitely great step farther than the highly developed town life represented by places like Jericho and Catal Huyuk. From towns they developed full-fledged cities, cities dependent upon the kind of surplus food supplies that only large-scale agriculture could provide.

Yet even as these first civilizations confronted similar problems and shared many of the same basic elements, they also developed distinct, unique cultures. The rivers along which they developed were not all alike. Techniques needed for mastering the Nile were very different from those necessary for taming the Tigris and Euphrates, for example. The Indus and the Huang He, too, each had their own unique features. Climates also varied enormously from region to region, affecting peoples' outlooks on life in different ways. Consequently, the 'style' of civilization varied considerably in all four regions, as it would in other regions that later developed civilizations of their own.